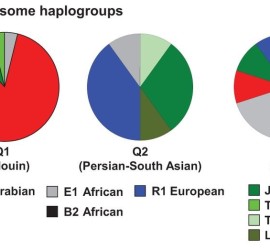 Bekada et al 2015 have published their paper “Genetic Heterogeneity in Algerian Human Populations”. In the present Algerian study only one J2a -M410 was found in North-west Oran1. Combined with earlier studies 8 J2 samples out of 305 total (Y-STR19 haplotypes + major Y-SNPs, S1 Table). By comparison there are 54 J1-M267 samples. IMHO another puzzle piece making early J2 expansion over Northwest Africa to Iberia/Europe unlikely. Other routes seem to be better expansion vectors.

Under the lead of Greg Magoon a group of citizen scientists (including J2-M172 team members Bonnie Schrack and Chris Rottensteiner) were involved in the analysis of a high-resolution a priori maximum parsimony Y-chromosome (“chrY”) phylogeny created from data of 1292 male samples in the 1000 Genomes Project. 63 of those samples are in haplogroup J2-M172 (42 in J2a and 21 […] 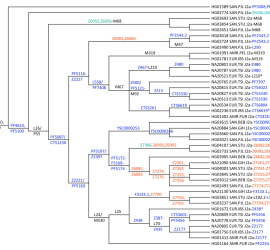