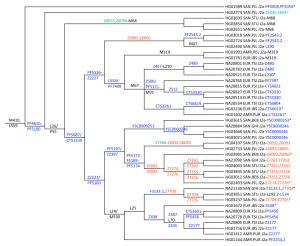 Under the lead of Greg Magoon a group of citizen scientists (including J2-M172 team members Bonnie Schrack and Chris Rottensteiner) were involved in the analysis of a high-resolution a priori maximum parsimony Y-chromosome (“chrY”) phylogeny created from data of 1292 male samples in the 1000 Genomes Project. 63 of those samples are in haplogroup J2-M172 (42 in J2a and 21 in J2b) and a good picture of the tree structure is available trough the preprint-paper. Chris Rottensteiner was responsible for the J2a part and Vince Tilroe for J2b.

SNP markers with names in the range Z6046 through Z8120 were identified and provisionally placed [in J2a …]
J2a-PF4610*  is  revealed  by  a  Punjabi  sample  and  independently  confirmed  by  seven  Sardinian  SNP results.  By comparisons, this ancient lineage is expected to be defined by Z6046 and its equivalents. […]
J2a-M68  has  an  Eastern  distribution,  with  two  Tamil  and  one  Punjabi  samples,  and  is  believed  to  lie  within  a haplogroup  defined  by  SNP  Z6055  and  equivalents,  by  comparison  with  two  Sardinian  samples.  This  proposed upstream haplogroup J2a-Z6055 could be interesting in future studies of the remaining J2a-L26* haplotype clusters.
J2a-F3133 haplogroup could be probably more reliably described by Z7700 and equivalents. Its subclade, Z7704, has the known subclades L192 and L534 below it.
J2a-PF5174, with three sequences from Tamil, two Bengali and two Punjabi as well as one Gujarati. When 13 Sardinian samples are also considered, a distribution from South Asia to Europe is apparent. Interesting substructure could be revealed  by  the proposed  sub-haplogroups defined  by  Z6082  and  Z7366.  Z6082 has the  subclade  Z7274  further subdivided  into  Z7255  and  Z7261.  Z7366,  by  comparison  with  three  Sardinians,  is  subdivided  in  Z6092  and PR2128.
J2a-PF5116,Z2227 sub of PF5087/CTS1230 unites known and new haplogroups with expected expansion mainly to Europe.  […] downstream is Z6065 etc. uniting one M47 sample from Punjab and an unknown lineage defined by another two Punjabi samples […]
J2b-M12 now sub-divides into three branches defined by M205, M241, and Z2453.
J2b2b-Z2432 is a significant new clade which exists primarily in south-west Asia, particularly India and surrounding regions.

An approach for generating high-resolution a priori maximum parsimony Y-chromosome (“chrY”) phylogenies based on SNP and small INDEL variant data from massively-parallel short-read (“next-generation”) sequencing data is described; the tree-generation methodology produces annotations localizing mutations to individual branches of the tree, along with indications of mutation placement uncertainty in cases for which “no-calls” (through lack of mapped reads or otherwise) at particular site precludes a precise placement of the mutation. The approach leverages careful variant site filtering and a novel iterative reweighting procedure to generate high-accuracy trees while considering variants in regions of chrY that had previously been excluded from analyses based on short-read sequencing data. It is argued that the proposed approach is also superior to previous region-based filtering approaches in that it adapts to the quality of the underlying data and will automatically allow the scope of sites considered to expand as the underlying data quality (e.g. through longer read lengths) improves. Key related issues, including calling of genotypes for the hemizygous chrY, reliability of variant results, read mismappings and “heterozygous” genotype calls, and the mutational stability of different variants are discussed and taken into account. The methodology is demonstrated through application to a dataset consisting of 1292 male samples from diverse populations and haplogroups, with the majority coming from low-coverage sequencing by the 1000 Genomes Project. Application of the tree-generation approach to these data produces a tree involving over 120,000 chrY variant sites (about 45,000 sites if “singletons” are excluded). The utility of this approach in refining the Y-chromosome phylogenetic tree is demonstrated by examining results for several haplogroups. The results indicate a number of new branches on the Y-chromosome phylogenetic tree, many of them subdividing known branches, but also including some that inform the presence of additional levels along the “trunk” of the tree. Finally, opportunities for extensions of this phylogenetic analysis approach to other types of genetic data are examined.