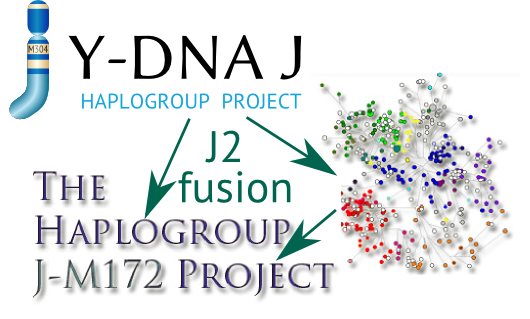 J2-Project admin Angela Cone who has blogged in Nov. 2012 about the reasons of low activity since 2008: “Sir Nico, Earthquakes, and Hypodopaminergia” and already announced her wish to have of team of  co-admins, everyone dedicated to a speciality area.

“Before this new J2 project incarnation can fully emerge, there will be a period of metamorphosis over the next few months.  Behind the scenes, this process has already begun. […]
The appointing of co-admins will be a gradual process over the project metamorphosis period, rather than immediate.  There are a number of reasons for this, […]”

Interestingly almost at the same time (end of 2012) the J1 admins of J-Project did begin to build up their own J1-Project. The J2 admins were thinking about the best solution for the remaining project members M172+. After some discussion and contacting of FTDNA IT support, it was clear, that only by having one strong J2 Project the research could be focused optimally and kit owners would not be confused by competing research. In June 2013 the first concrete discussions for the big “joint venture” did begin and shortly after it was clear:
J2-Project will join forces with J2 Admins and J2 Members of the J-Project., who will migrate to J2-Project. Janine Cloud (FTDNA Customer Support Supervisor/Event Coordinator) was involved in the discussions and all were happy with this agreement.

One thought on “J/J2 fusion under way @ FTDNA”