FTDNA J2 Tree 28th April 2015 edited to show important SNP also included in J2-M172 Research Tree simplified Y-DNA Haplotree Created in partnership with Haplogroup J-M172 This lineage originated in the northern portion of the Fertile Crescent where it later spread throughout central Asia, the Mediterranean, and south into India. As with other populations with Mediterranean ancestry this lineage is […] 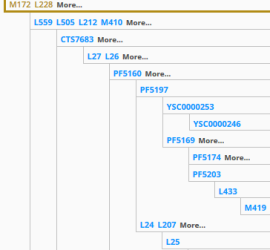